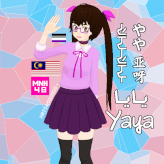 I am Yaya MNH48, formerly goes under the username muhdnurhidayat before stopping it. My real name is Nurul Azeera Hidayah @ Muhammad Nur Hidayat, the six-word name is my real given name in the real world, I only write my given name (first name) and never publish my patronymic name (last name) on internet as patronymic name is private. Also, my name appears to be masculine to some and feminine to others, but I’m neither. I’m non-binary gendered, not a male nor female. Both the third word Hidayah and the sixth word Hidayat are read the same way, with a silence-H / silence-T and just elongate the last A sound, and they are both spelt the same way when written in Jawi script anyway: هداية.

I also have two separate Chinese names that had similar reading with each other. One is Xī dáyǎ (希达雅) which was used when I was in the kindergarten, the other is Xǐ dáyà (喜达亚) which was used when I was in primary school (elementary school), which is also printed on my primary school graduation certificate. Both names were given by the headmistress during my admission to the kindergarten or primary school respectively, and it’s believed to be a transcription of my given name, specifically the 3rd word Hidayah and 6th word Hidayat. I have since only used Xǐ dáyà (喜达亚) when I write my name in Chinese as I use that name for a longer time when compared to the other name. In some cases, I use a Japanese name to make myself friendly when commenting on Japanese sites or discussing on Japanese forums, that is Yatsuko YASUYOSHI (安喜弥津子).

Why do you change your username? 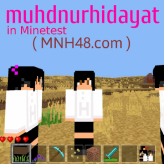 Back when I use muhdnurhidayat as username, most people on internet will just refer to me as “muhd”, the first 4 letters of my username. While people in Malaysia will always read “muhd” as “Muhammad”, I’m certainly sure that people from other regions will read “muhd” as four separate letters M-U-H-D or maybe read it as MUH with an D added, something like Muh’d.

There was also the fact that the username muhdnurhidayat is automatically viewed as someone masculine because of the underlying spelling and the fact it contained the name of Muhammad in it. It had made many awkward moments when people keep mistaking me as male when I am feminine-leaning non-binary who kinda wear feminine all the time, like my personal favourite clothing is to wear short skirt with long socks and exposing the bare skin on thigh region, also known as Zettai Ryouiki fashion style. By changing the username to MNH48, people would not straight away assume that I’m male and will always ask me first. I’m a non-binary gendered person who uses both they/them and she/her pronouns.

What is the meaning behind MNH48? 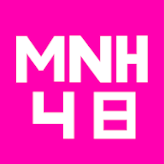 MNH48 is simply the short form of the old username muhdnurhidayat combined with my lucky number 48, at least it’s not too obvious that it contains the word Muhammad in it when abbreviated this way.

There was a long backstory about the number 48, but the main story was of that during computer class when I was in form 1 (7th grade) of secondary school (middle school / high school) back in 2009. The processors of the computers in the computer laboratory were 32-bit, and there were issues about certain portable softwares not able to run because they were written for 64-bit processor. Without having proper computer knowledge at the time, I dumbly suggested that we “should use 48-bit” as simple middle ground between 32-bit and 64-bit, since (32+64)÷2=48. My classmates actually start to use the number 48 to tease me from the class onwards, but I take it as my lucky number and would not forget the incident.

What is the reason for using the name Yatsuko YASUYOSHI?

The family name Yasuyoshi (安喜) was chosen as I found it on certain site that claimed that the family name in that reading being near-extinct, as more people are using the same family name in different reading which is Anki. I for one don’t want anything to extinct, so I decide to use it. It also contain the kanji 喜 so it relates to my existing Chinese name of Xǐ dáyà (喜达亚).

The given name Yatsuko (弥津子) on other hand is just a way to make it logical to connect with other Japanese words while retaining the important part of my native name, Ya (from the third sound of the third word Hidayah and sixth word Hidayat). In first round, I use hiragana only as the basis, with Ya (や) as the starting point. Adding Ya (や) with Tsu (つ) make it easier to attach to stuff like the honorific -chan (～ちゃん), making it Yacchan (やっちゃん) which sounds cuter and easier to pronounce than the plain Yachan (やちゃん). After that, I attach Yatsu (やつ) from earlier with the ending Ko (こ) which is something common for feminine-sounding name. When I get the full name in hiragana as Yatsuko (やつこ), I just use the principle of Ateji (当て字) and associate the kanji that has the reading, because I want name in Kanji instead of Hiragana, hence the name Yatsuko (弥津子) was born.

Why is your given name so long? 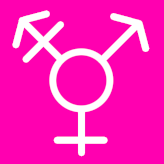 It is so that it could be gender neutral. As names in Malay in general are heavily gendered, the only way to make it neutral is by combining both masculine and feminine names. I know that some people from the west might go crazy when they read “Muhammad” but rest assured that it’s a very common part of name in Malay families especially in Malaysia and that the rest of the world does not go crazy from simply reading it.

Where are you from? 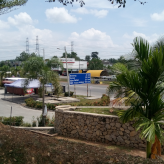 I came from a very small town known as Sungai Lalang, where the Sungai Lalang River (Sungai Sungai Lalang) runs through. Yes, that is the river shown on this blog’s homepage header. The town is located north of Sungai Petani, the largest town in Kedah, Malaysia. There are more than hundreds of regions in Sungai Petani and some were overlapping with each other because of the confusing region dividing system, so you would not even know which part of Sungai Lalang I came from anyway. Some of the houses use postcode different from neighbour’s house postcode even though they’re in the same region and resides on the same street, and postman from different postcode had to come to same street for delivery because of that. It’s amusing to see two postman at same time delivering to different house on the same street.

Why do I see some Arabic in your website? 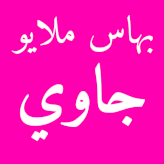 Those are not Arabic language, it’s Malay language written in Jawi script which was based on Arabic script. I’m a Malay person, I’m not Arabian, and I don’t even know and don’t even want to learn the Arabic language because of the attitude of Arabian tourists in our country. They might behave in their own country due to the strict regulation by their government, but they showed their real attitude when they’re out of their country.

Where do you study?

Please refer to the education page on my blog.

How is your life?

I’m kinda fine, albeit tired as I still did not get any job after many interviews. Life as a gender minority is very tough.